Smith continued scribbling in the notebook Mel had so generously provided even as the three Earthlings exited the forest. Mel walked behind Smith, still gripping his sword as it bobbed in the jury-rigged sheath at his side. Carla was the only one of the three who was actually looking where they were going, which worked out as her perch on top of her uncle’s head was the best vantage point to serve as lookout. Over the past few days, Carla had been working on her pronunciation to the point where it was clear even to Smith what she meant when she declared that they had arrived at a desert.

“We have arrived at a dethpleh,” Carla spat the last syllable, accidentally spraying the back of Smith’s neck with beefy saliva. “Bleh. My Etheth thtill don’t worpff.”

“Or your K’s, sounds like. Good job with the rhotacism, though,” Smith slowed to a stop as the grass of the forest faded into sand. “And if that’s what I think it is, I’ve finally narrowed down our location.”

Smith pointed to the wide, flat landscape before them. There were occasional bushes and small, squat cacti, but for the most part it was just dry, red-brown dirt speckled with the odd shiny stone.

Mel took his niece off of his head and stretched his neck. “No offense, Carla, but it’s kind of a pain in the neck to hold you up there all the time. Literally, I mean. As in my neck hurts.”

Smith looked over to the sun as it neared the horizon. “Is it weird to say you wear your daughter on your head? Not that it’s any of my business, being your prisoner and all of that, but even if she’s a hat, it sounds pretty gross.”

“Right, niece, whatever. I don’t know how they do it back in China, but-“

“I told you, we’re Japanese.” Mel pointed his Carla-holding hand at Smith, which wasn’t exactly comfortable for the burger-woman as she was being swung around in the air more than was ideal. “Not even. I mean, we’re American. Born and raised.”

“You thaid it wrong,” chimed in the dizzy hat.

“Yeah, and you’re the one correcting pronunciation.”

“Hey!” Mel made sure not to gesture too hard with the hand holding Carla as he shut the others up. “Smith, have you figured out your mapping stuff yet?”

Smith flipped a few pages in the notebook. “Here we go. We know we’re in a world called Papyrus, from what you two saw. I remembered seeing a few maps while I was with the Redshirts, then eliminated the normal Earth ones and tried to sort through anything I remembered with familiar landmarks. There were three spots with sock mountains on the map-“

“How could you tell-“

“Because when you have mountains made out of socks, the only way to label it is with the words ‘sock mountain’.” Smith found the page on which he’d sketched a few more maps and then circled one. “Anyway, two of those had markings that probably meant a portal to or from Earth and both were by forested areas, but only one of them also had mountains and a desert.”

“We’ve been walking downhill all day.” This time, it was Mel explaining Smith’s exposition to his niece. “And remember, back at the cathedral, how hilly all the surrounding land was? Makes sense there would be a desert nearby, even if the transition is kind of sudden.”

All three of the Earthlings looked from the trees behind them to the thinning grass where they stood and the desert only a few feet away, with its oddly firm bushes and oddly square cacti. Smith cleared his throat. “Well, the landscape is going to be weird, but I think everything here is weird. From what I’ve seen so far, lost things go to Papyrus, so that means out-of-place socks, landforms, buildings, even us. I’m honestly still more weirded out by the creepy centaur lady than weird geography, but that’s just me.”

“She wasn’t creepy, really. Just lonely. And if it weren’t for her, that gross demon thing would have killed us all.”

“If it weren’t for me, you mean. I shot it.” Smith tapped his knuckle on the empty gun on his side, wincing slightly when the metal hit his thigh.

“Anyway,” Smith held up the notebook page for the Okabes to see. “We’re now in the desert portion of an island about the size of the United Kingdom, which was marked with a key.”

“No, not like a map key to say what symbols mean. I mean an actual key, like a little metal thing, was drawn on the map, see?” Here Smith tapped his pen on the map, where he had indeed drawn a little key. 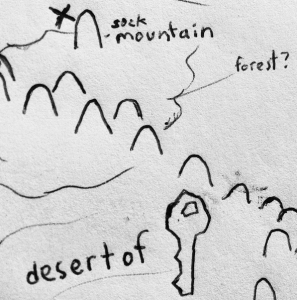 “Alright,” said Mel, removing his emergency bag and placing it on the ground beside him, carefully avoiding hitting Carla with the strap. “So what does the key mean?”

“It can’t mean rain, stupid.” Smith eyed the bag with some suspicion, as if he thought Mel was hiding something dangerous. “It’s not even raining. That’s what makes a desert a desert, right? No rain.”

“No, she’s right.” Mel pointed to where Carla had been looking. Big bronze-colored clouds were ahead of the trio, rapidly growing as they drew closer. “Those clouds are moving really fast.”

Smith turned to face the southern horizon and the thin, winding cloud formations. “Should be fine. Those look like cirrocumulus clouds, and they don’t rain. That good memory of mine is good for stuff other than maps, you know. Trust me on this.”

Despite his dismissal, Smith still looked somewhat worried. Mel looked from the bronzing sky to the notebook dangling by the convict’s side then back again.

“Oh, come on. It can’t be.” Mel grabbed his bag and tossed his niece back on top of his head, walking forward to the nearest spot on the ground where a shiny stone could be found. He picked it up and dusted it off on his shirt.

Mel tossed the found object at Smith, who flinched before seeing what it was. The shiny was a metal key, slightly eroded from the desert wind.

“Good job fixing your K’s, by the way.” Smith had already caught up with the other two by virtue of not carrying a heavy duffel bag. “Anybody see anything?”

Mel started to answer, but interrupted himself by falling face down on the ground. Fortunately, there were no cacti around to break his fall.

Over cries of “Jesus, my ankle! Why am I always falling over things?”, Carla jumped off to investigate the thing which had tripped her ride.

The sound of sharp metal rain thunking into the ground reached the ears (or, in Carla’s case, the featureless sides of her wheat bun head) of the three right as Carla flipped up a round, flat piece of wood.

Smith, Carla and Mel jumped into the empty barrel before even thinking whether it would hold the three of them. As the wooden lid clopped down above them, phosphorescent light illuminated their surroundings. There were wooden hallways stretching several directions as far as the eye could see by the light of fungal lamps strewn across the walls. Above them, the hail of keys clattered and clanged against wooden manholes, hard ground and what must have been very hardy cactus flesh.

“Where are we?” asked Smith, although with the eyes of all three of them adjusting, nobody could yet tell that there were maps and directions carved all along the walls, or that the ground was covered in loamy moss, or that it was a pointy-jawed man with a strange nose who answered the question with “Welcome to Barrelton, travelers. How long will you be with us?”